ECGSIM is an interactive simulation program that enables one to study the relationship between the electric activity of the myocardium and the resulting potentials on the thorax: PQRST wave forms as well as body surface potential maps.

One of the purposes of ECGSIM is to serve as a teaching tool for students of the basic aspects of electrocardiography. In a typical setting students use ECGSIM in a lab class environment. Following instructions, they change the electric activity of the heart and observe the effect on the ECG. Example instructions may be downloaded from the download area.

ECGSIM is also used as a research tool for those that are interested to test any hypothesis they may have regarding the manifestation of cardiac malfunctioning in the electrocardiographic wave forms on the thorax.

Please note: Any diagnostic application is only indirect; ECGSIM provides a forward simulation and does not solve the inverse problem.

ECGSIM's main windows consists of several panes. One of them displays the heart, together with a map of the depolarization times, repolarization times or transmembrane potential amplitude at the heart. The user may change these parameters, and observe in the other panes the effect of these changes on the ECG and the potential at the body surface. 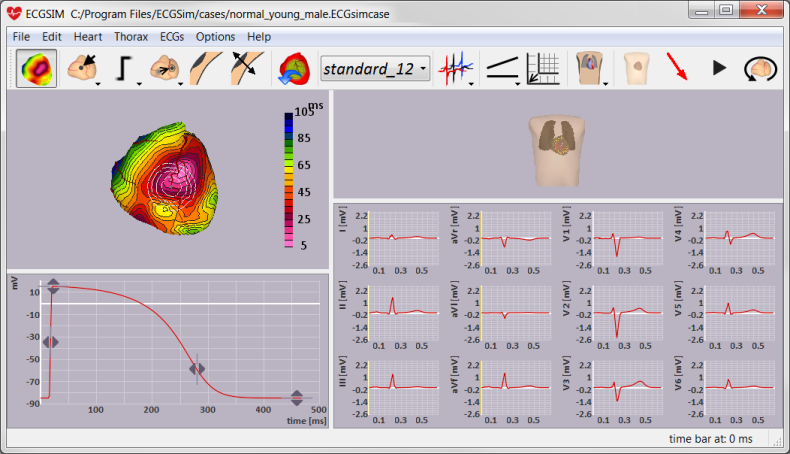 In an educational setting users change the electric activity in regions of the heart to simulate defects like local ischemia, bundle branch blocks, hypertrophy and ectopic foci. Observing the effect on the ECG will help the students to understand the relation between the activity of the heart and its expression in the ECG.

ECGSIM is based on the equivalent surface source model, which states that the electric potentials at the body surface generated by the heart are determined completely by the transmembrane potentials at the surface bounding the active region (the myocardium). Hence, ECGSIM uses the waveform of the transmembrane potential at the surface consisting of the epicardium, endocardium and AV-ring as the source model. The atria and ventricles are represented by separate surfaces. In the most common application, the waveform is parameterized by the depolarization time, the repolarization time and the transmembrane amplitude.

The geometry of the heart, and that of the structures that represent regions of different electric conductivity, were determined from MR images. From this a volume conductor model was constructed. The boundary element model was used to compute the transfer function that describes the relation between the transmembrane potentials at the surface of the myocardium and the potentials at the body surface, based on the laws of current flow in an inhomogeneous medium.

The depolarization and repolarization times were estimated from measured ECGs using an inverse procedure (see references). These are the default parameters that are used in ECGSIM. The user can change these parameters, and ECGSIM uses the transfer function to compute the resulting ECGs.

More details of the theory behind ECGSIM can be found in the papers listed in the reference list.

The theory used has been developed starting in 1972 in a collaboration between the department of Medical Physics and the department of Cardiology and Clinical Physiology of the University of Amsterdam, and has been expanded from 1981 onward at the Department of Medical Physics of the University of Nijmegen, both cities located in the Netherlands. The simulation package has had several predecessors. The ongoing development has been inspired by the enthusiastic comments of the users to which these earlier versions have been made available.

The package is constantly being developed to greater perfection. Recent updates will be available from www.ecgsim.org. You can determine the version you are currently working with by choosing About ECGSIM in the Help menu. You can also use the update checking tool that is part of the installer or use the update checking feature build in the application.

Additional material, such as specific cases and tutorials, are also distribution through www.ecgsim.org

Any comments and suggestions for improvements will be greatly appreciated. Please send your comments by e-mail to .